Winter Atlassing – Crossbills in the crosshairs

The southern movement of winter finches into central and southern Ontario is always a highly anticipated event as birders feverishly scour the neighbourhood conifers, alders and feeders hoping to add to their annual lists. Most of the species will return to their northern breeding grounds as spring arrives, but there are a couple of notable exceptions; Red and White-winged crossbills occasionally take advantage of a newfound food resources and breed during their southern foray.

Regardless of the date, if birds are breeding then it is time to start Atlassing! Both crossbill species are well known for breeding sporadically across the Province when conditions are favourable. White-winged Crossbills have been known to breed in every month of the year, but there are generally three discrete nesting periods that are aligned with the availability of seed production in various conifers.

Red Crossbill breeding in late winter in Algonquin is often associated with white pine and hemlock.

Only November and December are thought of as unusual months for breeding in both species of crossbills due to increased energy requirements needed for molt and unreliable weather conditions but there is evidence that both species may start establishing territories in Ontario by mid-December.

There is a paucity of crossbill nesting information in Ontario, but looking through the Ontario Nest Records Scheme data (now Project Nestwatch), it is evident that crossbills are not averse to winter breeding. White-winged Crossbills have been documented nesting from late December through April with a couple of additional records in August. Confirmed breeding evidence during the 2nd Ontario Breeding Bird Atlas (2001-2005) most often involved sightings of fledged young. Similarly, Red Crossbills have been documented nesting from late January through May in Project Nestwatch and breeding was also confirmed in the summer months a handful of times during Atlas-2. The highest abundance of both species was found through the Southern and Northern Shield regions but breeding has also been documented in the Lake Simcoe-Rideau (i.e. south of the Canadian Shield and north of the Carolinian) and Carolinian regions of the Province.

Many, if not most, crossbill nests occur outside of the primary Atlas survey period of May through July, which makes confirmation of breeding difficult and potentially challenging. But, with the recent influx of crossbills in the last two months into southern Ontario and the beginning of Atlas-3 only a couple of weeks away (data collection for Atlas-3 starts on January 1, 2021: see the Home Page), it may be time to take observations of crossbills to the next level.

I would be the first to admit that I am not a crossbill nest finding expert, but I do have some experience, and, with some help from friends we were able to find a White-winged Crossbill nest in Palgrave, Peel RM (Atlas Region 10), during the last Atlas. If you want more information on this nest see: Coady, 2001 in Ontario Birds.

To get started on your crossbill sleuthing, get to know your square and the habitats within the square. When you are looking for crossbills you need to look for conifers with a good cone crop. If and when you do find crossbills, spend some time watching their behaviour. Crossbills may nest in any area where there is a significant cone crop that will supply their food needs for over a month. They need provisions for the time it will take to build a nest, incubate eggs and raise young. In order to help document crossbills, and their likelihood of breeding, here is a quick run through of the appropriate process and Atlas breeding codes:

1. Birds that are flying overhead or simply feeding and calling that happen to be in an area for a only a day or two are unlikely to be setting up territories. Select the following:

2. Birds that are feeding in an area with a substantial cone crop and have been staying for more than a day or two:

3. Next, move on to the males specifically. If you hear and see one or several males singing from a prominent perch you can record “S” or “M”:

M (Probable) – At least 7 individuals singing or producing other sounds associated with or heard during the same visit to a single square and in suitable nesting habitat during the species’ breeding season.

4. Males establish small territories around the nesting site but they do not have territories in feeding areas so breeding could be occurring even if you see a group of birds together feeding. If you do start seeing evidence of male singing then it is time to spend less time looking at the male and more time watching females. Males will often stay close to females and will follow closely behind in flight during courtship. Check one of the following:

Note – Due to their unpredictable behaviour and transient nature, the T code is not appropriate and has been disallowed for crossbills. T (Probable) – Permanent territory presumed through registration of territorial song, or the occurrence of an adult bird, at the same place, in breeding habitat, on at least two days a week or more apart, during its breeding season. Use discretion when using this code.

D (Probable) – Courtship or display, including interaction between a male and a female or two males, including courtship feeding or copulation.

5. Females build the nest, incubate the eggs and are responsible for brooding the young. However, males have been noted carrying nesting material to the nest on occasion. Conifer twigs are often used for the outside of the nest but a variety of material including lichens, plant fibres, moss, hair and cocoons may be used to line the nest. If you do see either sex carrying nesting material then you can check the following:

6. Nests are well hidden in conifers, with spruce being preferred by white-winged Crossbills and pine or spruce in the case of Red Crossbills. Nest heights range from 1-20 m. If you do find a nest, especially in winter, try to stay back and observe from a distance. Although the nest is well insulated, flushing the female in cold weather can be dangerous for eggs and young. Check the most appropriate code: 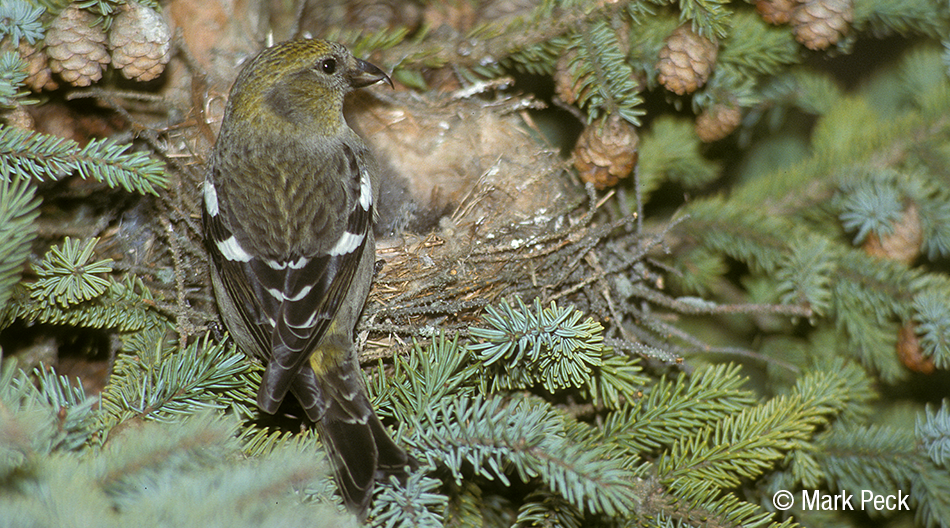 Female at nest in Palgrave, Peel RM, 18 March 2001. Notice the spruce twigs on the outside of the nest and the well-insulated lining.

7. Adults regurgitate food to their young and usually eat the faecal sac so it is unlikely that you will see either behaviour. Consider carefully if choosing, FS (Confirmed) – Adult carrying faecal sac.

Note: CF (Confirmed) – Adult carrying food for young, has been disallowed for crossbills.

8. When the female is incubating or brooding and when the nestlings are older, males may go to the nest to help with feeding. When the young fledge, both parents will feed but if the pair starts to renest feeding of the fledglings may fall to the male. In areas with an abundant food supply, both species of crossbills may quickly re-nest if they suffer a nest failure due to a weather event or depredation. In such situations they are often seen to salvage nest lining material from the previously failed nests. Also be aware the young crossbills maintain juvenile plumage for a considerable period after fledging so use the following selection carefully:

Well, that should just about do it except for two, small additional suggestions. If you do find a crossbill breeding and you have a little time and energy please enter the nest information to Project Nestwatch. And, if you are interested in helping to better understand the different Red Crossbill types make an audio recording of some of the flight calls and include them with your checklist. See https://ebird.org/news/recrtype/ for more information on Red Crossbill call types. Good luck.