The expansion of Fish Crow into Ontario has brought about identification challenges for birders throughout the province. Fish Crow was historically considered an extremely rare vagrant in Ontario; however, since 2012, the species has undergone a rapid expansion into the province. The most likely route of expansion is by way of the Finger Lakes region of upstate New York (NY) where a resident population of Fish Crows has been present since the late 1970s (Wells and McGowan 1991). The species has also expanded up the Mississippi River valley (e.g. Hicks 2009), which cannot be discounted as a possible source of Ontario birds, especially those showing up occasionally in the extreme southwest of the province. 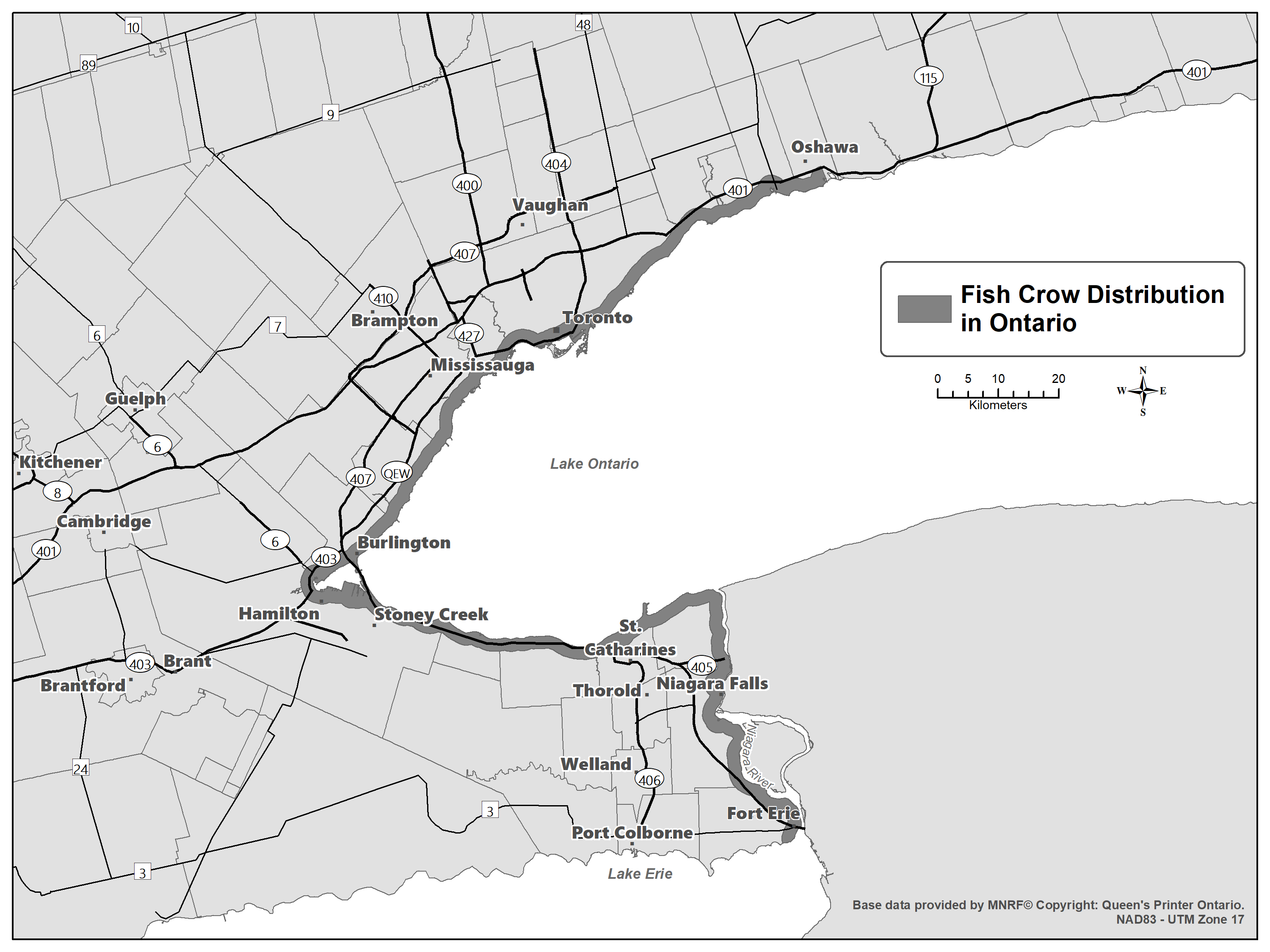 Since 2012 and the rapid expansion of Fish Crows into Ontario, increasing evidence of breeding has been noted primarily in the Niagara area and between Toronto and Burlington. The first documented nest was reported in 2018 (Fazio 2019) and current evidence suggests they may be breeding in various areas in close proximity (i.e. within 1 km) of the Niagara River and Lake Ontario shoreline from the Niagara area, through Hamilton and Toronto and possibly as far east as Oshawa. There have been scattered breeding season records outside of this “core” area where they should be watched for as well.

In southern Ontario, American Crows typically initiate their breeding territory establishment starting in about mid-March. During this time, crows will vocalize frequently throughout their territories and while adults are on the nest incubating eggs. Eggs are laid as early as late March in southern Ontario and incubation lasts about 17 days with young typically hatching in late April to mid-May. Fledging occurs typically around late May but can last through the end of July in rare cases. (Dates and durations from Peck and James (1987), Rousseu and Drolet (2015), and Verbeek and Caffrey (2020)).

In the Ithaca, NY population, Fish Crows tend to nest about two to three weeks later than American Crows (McGowan 2020), and this timing matches the documented 2018 nest in Mississauga (Fazio 2019).

Fish Crow and American Crow are virtually identical visually, with visual cues that make differentiating between the two species very challenging, if not downright impossible to observe. On average, Fish Crows weigh 50-70% that of American Crows; however, this size difference can be hard to judge unless the two are side-by-side and is complicated by sexual size dimorphism in both species (males are larger than females). Fish Crows can also be glossier in appearance and have slightly more ‘petite’ bills. There are several other minute plumage differences, such as primary formula, which are best outlined in Kevin McGowan’s detailed overview: https://www.birds.cornell.edu/crows/FishCrow.htm 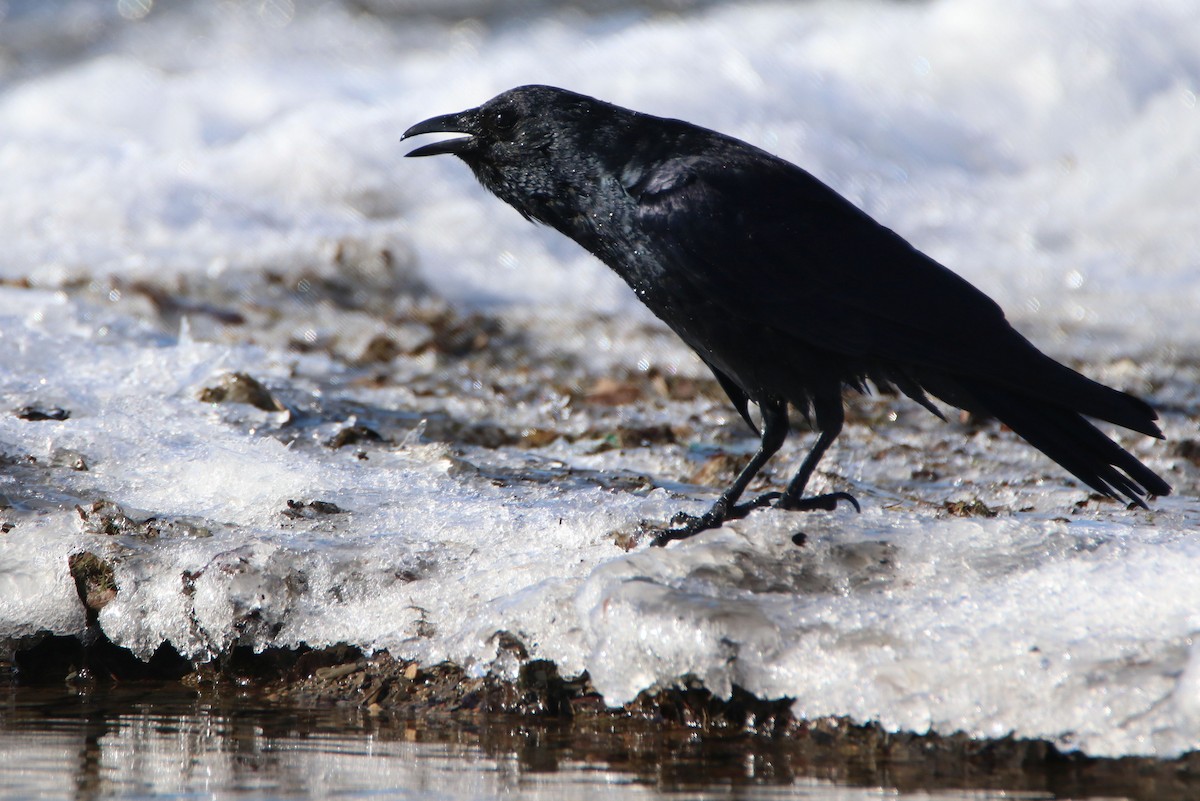 The best – and most reliable – way to differentiate Fish and American Crows is through their vocalizations.

American Crow vocalizations are best characterized by their familiar “caw-caw” call which can be given clearly or harshly. Examples of their range of calls can be found on Xeno-Canto, the Macaulay Library, and the Peterson Guide to Bird Sounds. Here is an example of a typical American Crow call sequence, starting with clear “caws” followed by harsher “caws” from a second bird in the background:

Fish Crow vocalizations are characterized as being much more nasal in quality, with single calls best described as “uhn” or “awh”; however, their two-part “uh-uh” call is most distinctive. Examples of their range of vocalizations can also be found on Xeno-Canto, the Macaulay Library, and the Peterson Guide to Bird Sounds. Here is an example of a typical Fish Crow giving mainly single note calls (note American Crow “caws” in background for comparison):

And here is an example of the double “uh-uh” call:

As a general rule, take a precautionary approach with all silent crows encountered within the narrow geographic band where Fish Crows are now readily found (see Figure 1). All silent crows in this region should be recorded as “Crow species”. Silent crows observed throughout the rest of the province can be recorded as American Crow.

Thanks to Laura Hockley of Natural Resource Solutions Inc. for the preparation of the map in Figure 1.