At almost any time of day in the summer months in deciduous forest, a Red-eyed Vireo may be heard singing. By some accounts this bird sings nonstop from dawn to dusk, and is one of the more commonly encountered passerines when atlassing in Ontario. But is that singing vireo a Red-eye, or a Phili? This is one of the challenges presented while atlassing. While Philadelphia and Red-eyed vireos are relatively easily separated visually, their songs are virtually indistinguishable. In fact, Red-eyed Vireo cannot tell the difference between their own song and that of a Philadelphia Vireo because Philadelphia Vireo imitates Red-eyed Vireo song. Another challenge is that Red-eyes are more often heard than seen because of their tendency to forage at the top of the tree canopy. Here we present some tips for atlassers to boost your confidence to differentiate between Red-eyed and Philadelphia vireos.

Red-eyed Vireo: A relatively large, long billed passerine that gives the appearance that it has a large head. They show a grey crown with distinct dark border, olive back, black line through the eye, red eye in adults, white breast. 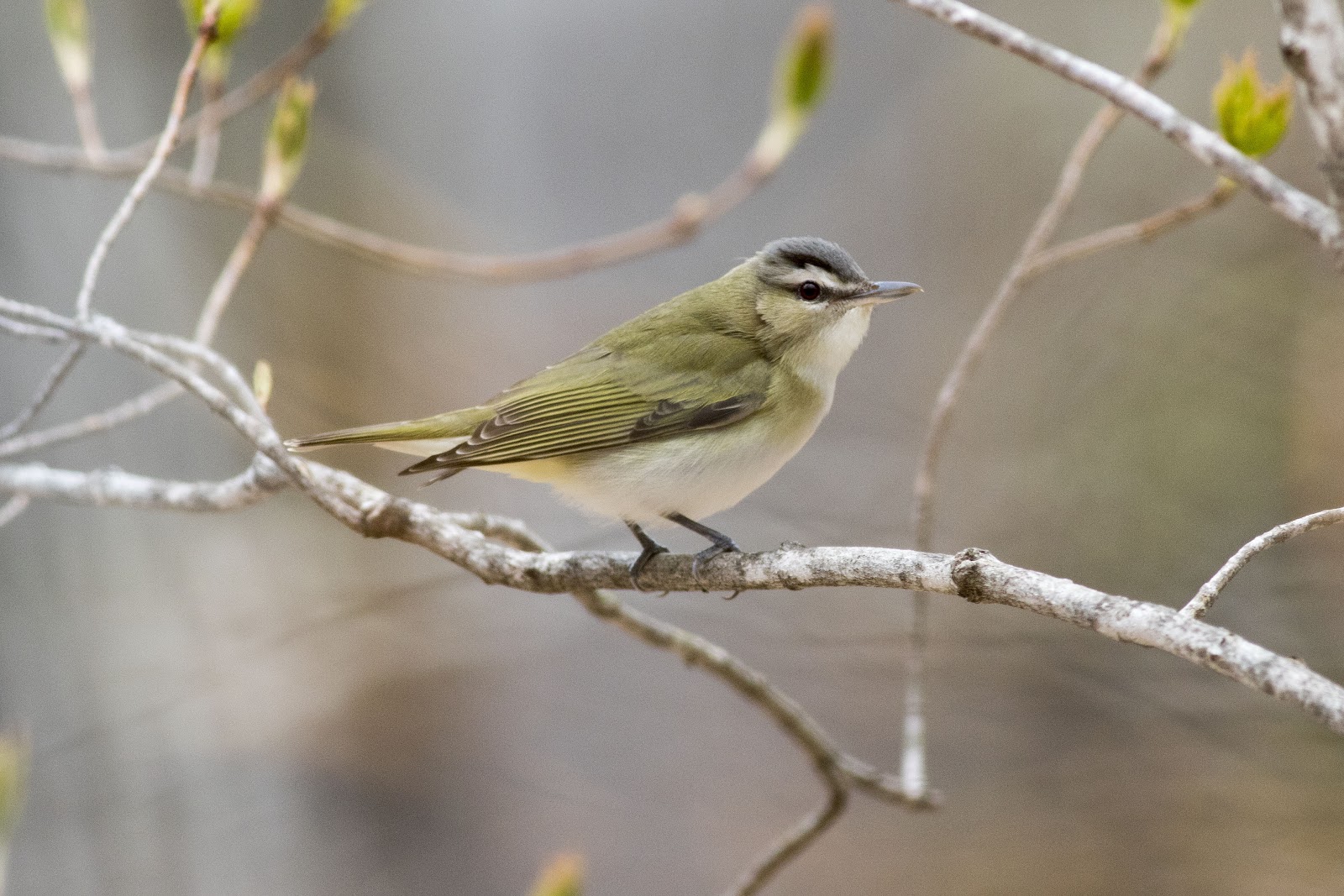 Philadelphia Vireo:Smaller than Red-eyed Vireo, short tailed with a rounded head compared to Red-eyed Vireo. Drab overall, indistinct eye-line, yellowish-green overall, yellowish belly. While the amount of yellow on the underparts varies across individuals, the area to pay attention to is the centre of the lower throat to the centre of the breast. This area will show the most consistent yellow on the underparts and should always have the brightest yellow of the underparts. 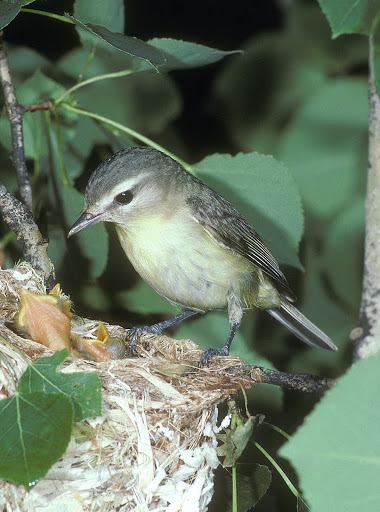 Red-eyed Vireo: 3- to 4-part song, louder than Philadelphia Vireo, known with mnemonic “Here I am, in a tree. Where are you? Can’t see me”. Phrases average one every two seconds. Individuals may have multiple different phrases that are strung together in a song. As a result, individual Red-eyed Vireos may have a large vocal repertoire and typically do not repeat songs.

Calls include a nasal, muted, mewing “meerf” or “zherr”. When agitated, the call is more of a whining, descending “rreeea”

Philadelphia Vireo: similar to Red-eyed song. On average, song is slower, higher pitched, not as emphatic and more broken in pattern. Pauses between phrases are on average longer; one phrase every three seconds. Songs are typically less complex than Red-eyed Vireo; that is, there are fewer phrases involved.

Calls are similar to Blue-headed Vireo — raspy and descending, nasal and soft, with a pattern of three to five short notes in slightly descending series “weeej weeezh weeezh weeezh”.

One of the common pitfalls includes identifying heard only birds in areas where the two species’ breeding ranges overlap; areas of range overlap include Regions 23-43. In these regions, both species are expected and care must be taken to confirm both breeding evidence and species identification; heard-only birds should be reported conservatively as the “Philadelphia/Red-eyed Vireo” “slash” option to indicate the uncertainty in identification. In areas where Philadelphia Vireo is not expected, visual confirmation is not required. This includes Regions 1-7, 10-12, 14-17, and 45-47. Bottom line is: don’t assume a singing vireo is a Red-eyed Vireo.